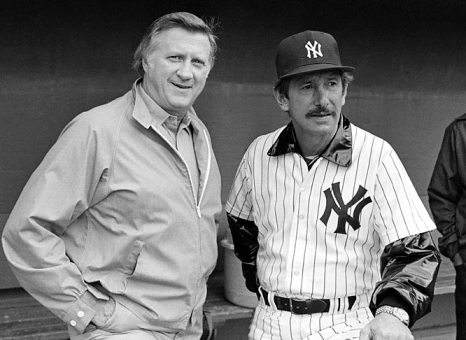 In case you’ve been under a rock this morning, George M. Steinbrenner III, owner of the greatest sports franchise in history for the past 38 years, passed away around 9:45am after a massive heart attack.He had just celebrated his 80thbirthday on July 4.

George was bombastic, argumentative and at times a bit crazy. But like your slightly off-kilter uncle, George was part of our family – and because he was always a fan first and owner second, we understood and accepted him, even when the rest of the world tried to shun him. We always knew we were part of the Yankees Family, as long as George was around. Yes, he made a ton of money, but unlike other owners in any sport, he put that money back into the team. Ask a fan in Kansas City or Pittsburgh if they would rather have their current ownership or a George Steinbrenner, and the answer is always “George.” As much as the rest of baseball cries foul every time the Yankees sign the best players on the free agent market to multi-million dollar contracts, MLB has never had to step in and force the Yankees to spend their revenue on improving the team (a la the Florida Marlins). Even when the media would hoist him on a petard of his own making, George remained the Boss: large and in charge.

And one thing remained constant throughout the years: winning. When he bought the team in 1973 from CBS, the Yankees had fallen to become a laughing stock. The great stadium was empty on most days and falling into disrepair, the team was terrible and without direction. From the start, the Boss was determined to restore the Yankee legacy. He convinced a broke New York City to repair the destitute field that had once seen immortals like Babe Ruth, Joe DiMaggio and Mickey Mantle. He imported new stars to roam a revitalized Yankee Stadium: Mickey Rivers. Willie Randolph. Graig Nettles. Lou Piniella. Bucky Dent. Chris Chambliss. Catfish Hunter. Reggie Jackson. Within three years, the Yankees had returned to the World Series. The next season, the team rewarded George with the first of his seven world championships. In 2009, the new Yankee Stadium was completed and while we were all saddened to see the original go, it truly is worthy of the name Yankee Stadium. George struck again, signing CC Sabathia, AJ Burnett and Mark Texeira. And once again, the team rewarded him with a world championship.

The public perception of George was of a man who didn’t care about those around him, but his legacy will be larger than the Bronx Bombers. Over the years, he created foundations that will continue to serve the needs of ordinary people throughout the Tampa and New York areas for years to come. As a veteran, the work George did for our servicemen and women, including sponsoring scholarships for the children of fallen heroes, will always hold a special place in my heart.

George Steinbrenner was not always a beloved figure in New York sports, but nobody ever doubted his commitment to winning. For that, Yankees fans everywhere will always love him. RIP, Boss – you earned it.

This entry was posted on July 13, 2010 by Ray Rothfeldt. It was filed under Sports and was tagged with george steinbrenner.