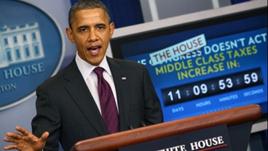 If there’s one thing we should have learned from this recession, it’s that politicians may not know how to fix it – but they sure know how to play politics with it. So, you’ll pardon me if my eyebrows arched up when the Great Obama proclaimed the House’s refusal to go along with the payroll tax compromise was “stealing $1,000 from hard-working middle class Americans.” The President has told some whoppers during his time in office (seems becoming President imbues the office holder with that ability), but where on earth did he come up with that number?

The compromise reached in the Senate only covers two months. Given the typical American earns $34,720 a year and we’re talking about 2% of pre-tax income, that $1,000 seems a pretty big number. So I ran some quick calculations and didn’t come near the $1,000 promised by the President. Over 8 weeks, the typical American would see a “whopping” $106.83 extra in take-home pay – or $13.35 per week. I don’t know about you, but $13.35 doesn’t buy me very much. It won’t fill my gas tank. It also doesn’t fit the bill on the “What $40 Means to Me” White House website. Even the TWO months of extra take home pay wouldn’t cover ONE month’s cell phone bill. So, I thought that perhaps the President simply got the two month compromise bill and the extra cash from a full year of the payroll tax reduction confused (could happen; I’m sure he’s busy fielding calls from Michelle about how sunny Hawaii is right now). Nope, wrong again – that only comes to $694.40, or about ½ of 1 month’s mortgage payment. Could it be he was talking about the top-end earner under the plan, the guy making $110,000 a year? Not really – he still only comes home with an extra $338 in his pocket over the course of the compromise. (See chart below for details)

While the extra take-home money is welcome by pretty much everyone, I don’t think if people stop to consider the implications of this tax cut they’ll be so anxious to get that extra $13 or so in their pockets. Hey, here’s a novel idea, one that gets the same amount of money into everyone’s pockets without annihilating the Social Security system: why not pass an income tax cut for everyone earning under $110,000 per year? Too simple an idea? Too broad based to get real support? Probably.

In the meantime, I’m not sure what they’re smoking during these White House – Senate confabs. But they better legalize it before Eric Holder catches a whiff.

This entry was posted on December 22, 2011 by Ray Rothfeldt. It was filed under Economics, Politics and was tagged with Average Income, Barack Obama, Eric Holder, Michelle Obama, Payroll Tax.