On Friday, President Obama shocked most of the country with his latest Executive Order. You know, the one that lit up the blogoshpere – his unilateral decision to stop deporting illegal immigrants who are attending school or served in the military. I figured as long as everyone else was chiming in on the topic, I might as well, too.

Let me begin by admitting that my thoughts on the illegal immigration issue run counter to most people on my side of the political fence. I think it is impractical and probably impossible to deport every single person who migrated to the US outside of the approved immigration policy. Did they break a book full of laws by settling here in that fashion? Sure, and for that I cannot see how any form of reward is proper. I certainly think that anyone who emigrated to the US (legally or otherwise) who engages in unlawful activity should be deported. I’m all for strengthening our border security, up to and including deploying the Army and Air Force with orders to shoot first. 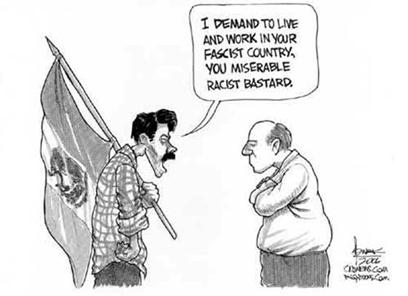 What we do with those who are already here, though, is a much trickier proposition. A big part of the problem is that there really isn’t a way of finding them all: they live mostly in the shadows. There isn’t even reliable data on how many immigrants are here illegally; news reports I’ve read over the past few days use numbers anywhere from 600,000 to 4 million. It’s as much a crap shoot as any statistic you will ever come across. I’ve decided that, essentially, the status quo is probably the best that can be done in their case. Unless they run afoul of the law or ask for social services, we can’t find them. Of course, if they do they should simply be sent packing. But otherwise, I’m content to allow them to stay in their shadow communities.

Often, when thinking in terms of immigration policy and standards, I look at things through my mother and grandmother’s eyes. They arrived here in1959, fresh from the Soviet bloc. As immigrants, they fully understood the challenges faced by other immigrants, regardless of origin, native tongues or anything else. They were both adamantly against illegal immigration, and understandably so. Even as political refugees, they had to go through a battery of tests and pre-qualifications before being allowed into the country. They thought it eminently unfair that anyone should just walk across the border and set up camp, without any need to prove they were willing to fully assimilate into American culture – or even demonstrate they had the skills to contribute to society.

So, extrapolating (there’s your big word for the day, folks!) from that premise, I cannot abide allowing those children to stay here on any sort of amnesty program. I realize the people the President’s order targets didn’t arrive here of their own accord. I’m even willing to let them return to their home countries with a preference on the waiting list. But if anyone thinks this is the beginning of meaningful immigration reform, they are seriously deluded. After all, even under the executive order those illegals affected won’t be granted residency status – only an act of Congress can do that.

We need to recognize this for what it is: an act of political pandering from the President Who Perfected Pandering. The EO signed on Friday only remains in effect until rescinded, either by a new President in 2013 or by the current one when he realizes it costs him more votes than it gains. It wasn’t a grand statement on the mess our immigration policy turned into after Ronald Reagan’s own bit of pandering in 1986 (the Immigration Reform and Control Act). Had Obama actually wanted to enact some type of meaningful reform, he would have combined the EO with a legislative proposal – not a Rose Garden speech asking Congress to do something. You’ll also note that in that speech, the President didn’t outline what he wanted as a result of the reform he demanded, a curious lack of leadership that is in keeping with his style.

What should be of greater concern to all, regardless of where you live, is this fits a pattern of flaunting the Constitution in order to score a cheap political point. In addition to this latest EO, we have other extra-constitutional power grabs that seem derived of partisan political maneuvering. Things like indefinite detention, refusing to support DOMA, international assassinations – the list is growing daily. The President, any President, does not have the prerogative of deciding which laws to enforce. His job is to enforce the law of the land and if he finds one unacceptable, he can request Congress rescind it. This latest EO actually requires a variety of law enforcement agencies, from the FBI and INS to Homeland Security, to willfully ignore the law. Such a situation should never be tolerated by the citizens of our republic.

This entry was posted on June 19, 2012 by Ray Rothfeldt. It was filed under Politics, Uncategorized and was tagged with Amnesty, Barack Obama, current-events, Executive Orders, Immigration, Immigration Reform, Political Spin.