How Do You Defeat Donald? Get Hillary Out 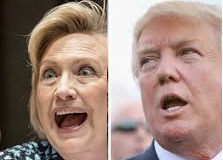 The other day, Hillary Clinton launched a blistering attack on Donald Trump’s foreign policy suggestions, his character and his temperament. Among some of the choice words she had were:

Salient points, all. Nothing about them can be disputed: the policies she attacked are all direct quotes of the Donald. There was just one problem with the entire speech.

It was delivered by Hillary Clinton.

This is the same Hillary Clinton responsible for the “Russian reset,” which has resulted in Vladimir Putin annexing parts of Georgia and Ukraine, harassing US & NATO ships and aircraft and settling into Syria.

The same Hillary Clinton responsible for starting the negotiations with Iran. The net result is that Iran will have US sanctioned nuclear weapons within a decade; weapons that we actually paid them to build.

The same Hillary Clinton who demonstrated (at the very least) horrible judgement in how she handled the nation’s top secrets. As a result of her insistence on breaking the rules and relying on a private, unsecured email system, it’s likely rogue nations like North Korea, China, Russia and others were reading classified intel in real-time. Heck, a Bulgarian hacker broke into that server in under 30 minutes, working by himself.

The same Hillary Clinton who bungled a Libya-to-Syria gun running operation, after bungling the “Arab Spring” related removal of Muammar Gaddafi, and then bungled the security arrangements of the US Consulate in Benghazi. The result? One dead American ambassador, along with three other Americans. And let’s not forget, there are still unanswered questions about why a rescue mission to save those men was never launched. The military has put that onus squarely on Hillary’s State Department.

In short, the Democrats aren’t incorrect in attacking Donald Trump as man wholly unfit for the office he is seeking. The problem is, their candidate is equally unfit for that same office. For every misstep Donald makes, Hillary has already made two. Her 44 year Washington DC record is as flawed as it is complete. And every attack she launches is easily parried with a counter-attack on her equally horrible record.

In fact, both candidates are so terrible that electing either could result in an immediate Constitutional crisis. It is a situation unprecedented in our history.

It’s also skewed the election in ways that pollsters and pundits can’t begin to sort out. But there is definitely one effect that doesn’t need to be polled to be understood: there are a lot of people who aren’t so much as supporting one candidate, as they are voting against the other. The same holds true for many of the political arena’s actors. They’ve endorsed their party’s candidate, not of party loyalty as much as pure disgust with the other party’s choice. Among Republicans, the one constant I hear regarding Trump is, “He’s not Hillary.”

I personally have my doubts about that. I look at both and see mirror images of one another. For me, Donald is Hillary. Hillary is Donald.

That being said, in the latest polling, Trump is only getting the support of roughly 1/3 of the electorate. I believe if Hillary were not the Democratic nominee, that support would crumble. Better than half of his support is of the #NeverHillary variety – those people do not support Donald and they will do anything to keep Hillary out of the Oval Office. That includes voting for someone they think is a horrible candidate.

So, it’s up to you, Democrats. If you truly want to keep Donald Trump from getting his tiny hands on the nuclear football, you’ll select someone other than Hillary Clinton as your nominee in Philadelphia. Oh, and for God’s sake:

Don’t let it be Bernie Sanders, either.

This entry was posted on June 4, 2016 by Ray Rothfeldt. It was filed under Politics and was tagged with Donald Trump, Election 2106, Hillary Clinton.