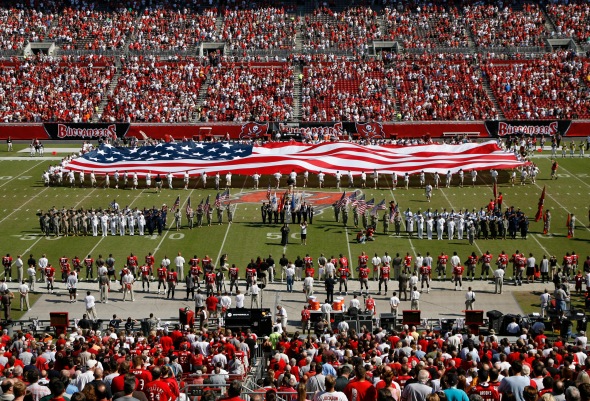 After a year of what may go down as the dumbest protest in American history, it seems the National Football League is ready to listen to their fans and end the shenanigans, once and for all. The NFLPA should thank them, before any more of their members are made to look like communist sympathizers.

Former NFL quarterback Colin Kaepernick began this hairbrained scheme on September 11, 2016. At the time, I thought it was nothing more than a very idiotic marketing ploy by a former starter whose poor play had landed him on the bench of a bad, and dysfunctional, team. He may have claimed it was to protest police brutality, but his actions since (appearing at press conference in Miami wearing a Fidel Castro t-shirt & drawing little pigs on his socks among them) only bolstered my opinion: either he was a wannabe Che Guevara (but without the cajones), or he was desperately trying to force the league to keep him employed. When the season began with him not having a job and the outcry went up from certain segments of the sports commentariat that Kaepernick “deserved” a job, I felt vindicated. After all, his terrible play the previous three seasons certainly didn’t justify his being on an NFL roster. But that didn’t stop that rather vocal group of commentators from assuring us the only reason Kaepernick was watching the games from his couch was racism.

(As a side note: 22 of 87 NFL quarterback are black, as are 9 of the 32 starters. The NFL, as are all pro sports leagues these days, is the most egalitarian of employers. The only thing that matters is performance on the field, not race or religion.)

The NFL is a league that employs rapists, murderers, drug fiends and wife beaters, among other sundry malcontents. And until a week ago, approximately a quarter of those players were engaging in on-the-field behavior 90% of the country finds reprehensible. The outcry and backlash was the result of a few players who may have thought they were doing something principled, and a bunch of guys who get paid to have their brains routinely bounced around their skulls falling for what President Trump does best: troll.

And that was the insanity of this protest from the get-go: perceived police brutality in American cities is a topic worthy of discussion. But the moment you start using the National Anthem and the US flag as the center of your protest, the cause gets drowned out. It isn’t very positive imagery. Look, I get it: the First Amendment allows political speech involving the national symbols as props. But it doesn’t excuse you from widespread ridicule and scorn when you’re even perceived to be disrespecting them. The result in that case tends to be that your cause gets lost in the noise. Nobody cares, nobody wants to hear it – worse, your cause becomes anti-American. If you need a better example, the Supreme Court rulings that upheld disrespecting the flag as political speech were over the flag burning incidents in the late 1960’s and early 70’s. Does anyone remember what those protests were about? No. All we remember is seeing the images of people burning a flag, and the outrage and anger it sparked.

Prior to the President’s calling out the players, only a handful were engaging in carrying on Kaepernick’s egregious demonstration. But, Trump Derangement Syndrome combined with the idea of team unity, and that Sunday nearly every team was protesting the flag and anthem. The blowback has been fierce, to say the least: attendance and viewership have cratered in the intervening two weeks. The league and networks have been scrambling, and the proposed rule change is a result of all that. Of course, the better option for the NFL might be to forgo the nearly $6 million they get annually from DoD for their contrived displays of patriotism prior to kickoff. But somehow, unless Congress expressly forbids it in the next budget, I don’t see that happening.

As for the players who feel strongly about police brutality and targeting, they have plenty of outlets to do something. After all, these are all multimillionaires with public megaphones in their adopted communities. They can arrange rallies and protest marches, and actually do more than simply stage ridiculous publicity stunts. They can endow scholarships. They can engage in outreach between their communities and the local police departments. Money and fame both talk, and neither is in short supply for a Cam Newton or Marshawn Lynch.

As for Mr. Kaepernick, he gave an interview on Saturday that amounted to him begging for a job. Of course, his girlfriend came out Sunday and tried to claim he was misquoted, but I suppose the cat is out of the proverbial bag now. As I thought from the beginning, he was trying to use the BLM activists to ensure his employment. Rather than celebrating him, they should be seething at this point. He used them, and in the process, turned their protest movement into a mockery of responsible public demonstration, making it a subject of abject ridicule.

As for me, I don’t watch football for political stunts and could care less about them. I tune in on Sundays to watch young men get their brains routinely bounced around their skulls, not unlike the Roman gladiators of old. Much the same as I don’t care a whit about the idiocy of the people who entertain me from Hollywood, the same goes for the ones on the gridiron. So I’ll keep watching, at least until they decide to switch from tackle to flag football.

Update: looks like the NFL isn’t going to force players to stand, only “encourage” them. Whatever, it’s their funeral. -10/11/17

This entry was posted on October 10, 2017 by Ray Rothfeldt. It was filed under Life in General and was tagged with Colin Kaepernick, Donald Trump, NFL Flag Controversy.