The Dems Tried to Make Brett Kavanaugh Their Handmaid. He Wasn’t Having Any Of It. 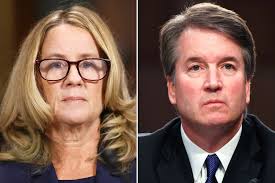 The bible of “third wave feminism” is Margaret Atwood’s The Handmaid’s Tale. Written in 1986, it is a dystopian novel in which societal collapse stemming from climate change, pollution and low birth rates has brought about a technologically enforced über-puritanism. Women are now slaves, and anyone who dares cross the regime is summarily executed, often on trumped up charges.

As a fan of dystopian fiction, I first read the novel in the early 90s. Personally, I don’t think the novel is particularly good. I found the story to be disjointed and not particularly engrossing. It’s entirely possible the author was hoping to evince a negative emotional response to her narrative. It wouldn’t surprise me; evoking negative emotional responses (loathing, fear, anxiety) is a hallmark of the progressive movement. Certainly, the entire circus around Brett Kavanaugh’s confirmation has been based on those emotions. The Democrats have whipped up the notion that Judge Kavanaugh’s elevation to the Supreme Court will mean the end of civil rights. This, despite the fact that his record as a jurist is in opposition to that supposition.

But this wasn’t what made me think of that story when watching yesterday’s testimony. No, it was one particular scene in the book. A member of the elite is found to secretly be supporting the ideal of liberty and fairness. The regime drums up a false charge, a charge rooted in the puritanical mores of the dominant society (yep, sexual assault). There is a sham trial. At the climactic moment of the scene, the crowd is whipped into a frenzy and turned loose upon the poor guy. He is literally torn to pieces in their anger and blood lust.

How is that any different than what we watched yesterday?

Do I think Dr. Blasey-Ford is sympathetic? Yes. Do  I think she’s credible? No. Her testimony was only clear on one point: she honestly, absolutely believes that Brett Kavanaugh attempted to rape her when both were in their teens. Despite that, she cannot even recall when that happened (not even a year, much less a month or a day). She does not know where it happened. She does not know how she got to where it happened (even though any of the possible locations are about a 20 minute drive from her childhood home) or how she got home afterwards. She does not know how long she was at the party where she alleges the attempted rape happened.

Dr. Ford has more memory lapses than a blackout drunk, which leads me to believe that the neurotransmitters in her hippocampus are defective. Or maybe she is a blackout drunk. Either that, or she remembers everything possible in a traumatic experience, but the other people she names as being at the party – including her lifelong friend, Leland Keyser – are lying when they say it never happened.

So how do I explain why she honestly believes Judge Kavanaugh tried to rape her? I’m not a medical expert, but we know memory transference is a real thing. By her own testimony, she was something of a social outcast in high school and the group she most wanted to be a part of was the circle that included a youthful Brett Kavanaugh. Perhaps an assault did happen, but she’s substituted the people who scorned her into the roles of the truly guilty.

Regardless of her credibility, however, is the process by which this entire episode has been handled by the Democrats. Among the more shocking things that came out during yesterday’s testimony is this. When Judge Kavanaugh met with Senator Feinstein on August 20th, she was not only aware of the allegations against him, but was actively working with Blasey-Ford on her future testimony through legal counsel. The entire idea that she didn’t leak the “anonymous” letter and that this wasn’t a manufactured crisis was blown apart with that fact.

Who can blame Brett Kavanaugh for lashing out at the Democrats during his testimony? He knows he is innocent of these allegations – and the even more ridiculous and spurious allegations that have followed. His credibility attacked, his family denigrated, his honor and reputation sullied? How would you expect him to react? Especially when Democratic Senators Kamala Harris, Cory Booker, Chris Coons, Diane Feinstein, Richard Blumethal and Dick Durbin announced they wouldn’t vote for him, even before the confirmation hearings began. Booker went so far as to call Kavanaugh “evil.” Think about that, for a moment.

Given all that, Kavanaugh’s confrontational manner wasn’t only justified, it was muted. I would  not have blamed him had he gone on a Lindsey Graham-esque tirade.

Democrats are reacting as they always do, given the circumstances, with outbursts of rage and indignation. They don’t like it, and like an emotionally overwrought child, they are throwing temper tantrums. They were certain that weaponizing criminal allegations against an upstanding citizen whose political views are at odds with theirs would result in the mob turning against him. Well, indications are their mob is ready to do to Judge Kavanaugh what happened to the poor guy in Atwood’s book: literally tear him limb from limb.

They attempted to turn Brett Kavanaugh into their Handmaid. He refused. After years of treating Republicans as their Handmaids, the GOP has finally risen up and declared, “Enough!”

The saddest, and most ironic, thing about this entire episode is that by weaponizing the #MeToo movement, Democrats have neutered it. By supposedly advocating for the rights of abuse victims, they have done the opposite. By lending credibility to incredible allegations, they have cast the pall of suspicion over all allegations of sexual victimization. By calling Dr. Ford’s allegations “credible,” despite an independent prosecutor saying there wasn’t enough evidence to even file charges, they have sullied not only the reputation of Judge Kavanaugh but those of every woman who’s been assaulted.

By playing politics with people’s lives, Democrats have shown themselves to be the cold, heartless would-be rulers who would turn all of us into their handmaids.

The Senate should confirm Brett Kavanaugh. We should reward them by voting for every Republican on the ballot come November 6th. We should tell the Democrats, with the same vigor and fire as Kavanaugh and Graham, that we will no longer be your handmaids.