But you’ll be hard pressed to come up with a worse combination of candidates and campaigns than 2016 has brought.

The incumbent party nominated a woman with a 40 year history of corruption and scandal. How can anyone be surprised that, true to form, she may well become the first President-elect under indictment in our history? If elected and she manages to avoid prosecution for what certainly looks like egregious violations of the law, Hillary Clinton’s presidency would be kneecapped before she ever takes the oath of office. Nobody trusts her. Nobody can even pretend to believe anything she does or says any longer. As her own campaign staff has said, she has demonstrated terrible instincts and decision making. To call the next four years under her “leadership” a disaster in the making is to be generous – to disasters.

Ordinarily, a candidate that bad and that flawed wouldn’t have a chance in hell of being elected. But the Republicans, in a remarkable display of self-immolation, nominated someone as equally awful. Every character deficiency exhibited by Mrs. Clinton is personified in spades by Donald Trump. Self-dealing? Corrupt? Narcissistic? Check off all those boxes. And just as Hillary “bleachbit” her copy, I’m not even sure Donald has even read the Constitution. But he loves his petty dictators, from Vlad Putin to Deng Xiaoping. As for the rest of us, he’s already he told us what he thinks: “For the most part, you can’t respect people because most people aren’t worthy of respect.”

I had held out hope for the Libertarian candidacy of Gary Johnson. That was before he started talking and proved that (a) he’s either insane or killed his brain in a fog of hash smoke and (b) he’s actually not a Libertarian. He is, however, obviously just as opportunistic as both of the major party candidates.

So, the top three pretenders for President of the United States are unqualified and unfit for the office they aspire to, and probably belong in prison. What is a patriotic citizen to do this November 8th?

There is an answer. There is one candidate who, despite probably not able to carry more than a couple of states, embodies the strength of character, dedication to Constitutional principles and belief in the greatness of America we’ve found so lacking in the other candidates.

That is why, for 2016, Political Baseballs is proud to endorse Evan McMullin of Utah for President of the United States.

Since he’s only listed in 11 states, odds are you will have to write his name in on your ballot. I encourage you to find out the vagaries regarding write-in candidates in your state and take the effort to write him in. As mentioned, he likely will not win. But casting your vote for Mr. McMullin will not be wasting it, for two reasons.

First, the entire concept of “voting for the lesser evil” is what has left our nation in it’s current state. Far too often, we accept the idea of a binary choice between two poor options. This leaves voters voting not as much for a candidate, as against the opposing candidate. It’s a terrible situation that our current political parties have delivered to the American people, one who’s likely outcome this time will be the worst four years for our republic since the Civil War. By voting for Mr. McMullin, you can actually vote for someone who isn’t corrupt, isn’t beholden to either political party, isn’t bankrolled by all of the usual power players and isn’t responsible to anyone other than his own conscience and the voters. Rather than needing to rinse the stink off from voting for Mr. Trump or Mrs. Clinton, you can be proud of your vote.

Second, by now even the most partisan among us have to realize something has gone terribly wrong with our political parties if the best candidates they can come up with are the parasites they’ve nominated. If you truly want to send a message that we, the People, have had enough of their nonsense, there is no better way than to vote for a candidate who is inviolate in his beliefs. Even if you do not agree with Mr. McMullin’s conservative viewpoint, you cannot deny his uncompromising defense of his principles. I’ve heard many of you over the last two years, both conservative and liberal, say you want to “blow up the system.” Voting for Mr. McMullin is a shot right into the heart of the unscrupulous parties that have placed power and wealth above the country.

So, when you vote, don’t worry about pulling a lever or punching a hole. Write in the only candidate worthy of your vote: Evan McMullin.

I’ve made no secret of my support for Gary Johnson since the GOP convention. He seemed the only sane choice left, and really, the only candidate with a legitimate chance of winning who was even qualified to assume the Presidency.

Hillary Clinton is terribly corrupt, incapable of following the law and eager to toss out the First and Second Amendments to the Constitution.

Donald Trump is terribly corrupt, abuses the law and unaware of the Constitution.

Both  the major party candidates are inveterate liars and lifelong con artists. They are not presidential material.

Gary Johnson is a two-term governor, who worked with a democratic state legislature to actually reduce the burden government placed on his state’s citizens. While I don’t agree with all of his positions, he has consistently held them for two decades. Prior to elective office, he built a major construction company from scratch, a personal exemplification of the American Dream. He is that rarest of breeds, the honest politician. He seemed to be the only candidate running who is qualified to be President.

And then came this morning.

In an appearance on the Morning Joe television program, Johnson showed he’s just as unqualified as the other two. Panelist Mike Barnicle asked him what he would do about Aleppo. Johnson replied by asking, “What is Aleppo?”.

Now, if you asked, “What is Aleppo?”, I could give you a pass. But Gary Johnson is not some schmuck walking the street. He is asking the American people to give him the most powerful office in the world. It is not beyond the pale to expect him to know at least the basics of foreign affairs.

I appreciate the honesty in admitting he didn’t know about one of the world’s major hotspots. But the lack of basic knowledge is disqualifying.

And for those of us trying to find someone we can support this November, it is also disheartening. 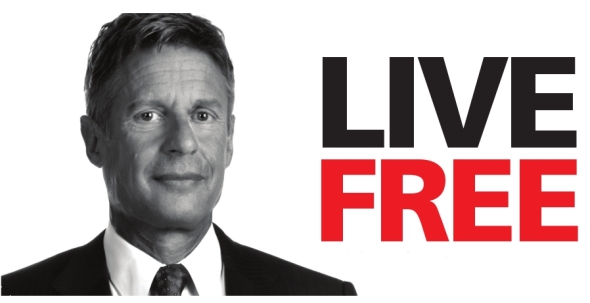 There are people supporting Donald Trump’s candidacy who honestly and fervently believe he is the savior the country needs. It’s seemingly a small slice of the country, somewhere between 15-20% of the country. Polling has consistently shown this for about six months now. This post is not directed at those people.

I’m speaking to the roughly 60% of the country who feel that Hillary Clinton is such a terrible, awful, horrendous candidate that she should never see the inside of the White House again. I feel the same. Her legacy of corruption, belief that the only wrong with government is that it’s not big enough and terrible judgement when given authority, should be enough to disqualify her from public office. But what really scares ordinary Americans about the potential of an HRC presidency is the blatant disregard for Constitutional principles and the way people around her keep dying. Envisioning her as the modern Nero, adding to her bank accounts while the country burns, isn’t a stretch.

Of those who think this way, about half of you are prepared to vote for a candidate who is equally unfit for office. A man who openly advocates violence against his detractors, who uses bigotry and classism as cover for his own corruption. The same man who has abandoned friends for political expediency while embracing those who mean the country harm.

The excuse, and that’s all it is, to those who think this way is that you’re voting for the lesser of two evils. That is not only illogical, it’s repugnant. It’s akin to voting for Baal instead of Satan, because while Baal might destroy the world, you know Satan will.

People, evil is still evil. If you’re voting for candidate A instead of candidate B because one is a murderer while the other is only a rapist, then you are still voting for a person of low moral character who has a disregard for society. You are voting for evil and condemning the country to ruin.

There is a better way, a candidate C. Perhaps you don’t agree with all of his positions. Maybe you find some of the things he advocates to be an affront to your sensibilities. But his character is not impugned, nor his patriotism. He isn’t holding rallies to talk about using violence in furtherance of political goals, and he doesn’t have a team of lifetime sycophants trying to cover up the daily revelations of corruption.

Candidate C is Gary Johnson, the Libertarian candidate. By voting for him, you won’t feel like you need to take a decontamination bath 24/7 for the next 4 years. Take a closer look, #NeverHillary voters. I think you’ll like what you see.

What a difference 48 hours can make

So, despite an economy that’s in the toilet and a solid 40% of the nation never buying your policies, you’ve managed to ride your personal popularity to a slight lead in the polls. Just to make matters more scintillating, the opposition seems intent on NOT winning the upcoming election. After all, how else do you explain their choice for nominee, a man who epitomizes many of the things most Americans personally despise? On top of that, the nominee has all the personality of flat white paint and switches positions so often even he doesn’t know which side of the fence to sit on.

If you didn’t know better, though, you would swear that Barack Obama has looked aver these gifts and decided he just doesn’t want to be President next year. It’s the only thing that makes any sense at this point. Otherwise, why would he be doing his best Jimmy Carter routine with less than six weeks until election day?

I’ve been traveling quite a bit over the past 48 hours. In a way, it’s probably a good thing – otherwise this blog would’ve blown up form all the posts. But to recap the events (in case you were hiding under a rock)

That last bit was the final straw. The Obama administration is obviously intent on throwing in the towel (and to Hell if he throws in the American people along with it). The question is, is Mitt Romney enough of a candidate to pick it up and run with it? I’m still not convinced he is. Until then, I’ll continue to support the only candidate on the ballot I see supporting American principles, values and commitments: Gary Johnson