We Have a Serious Problem 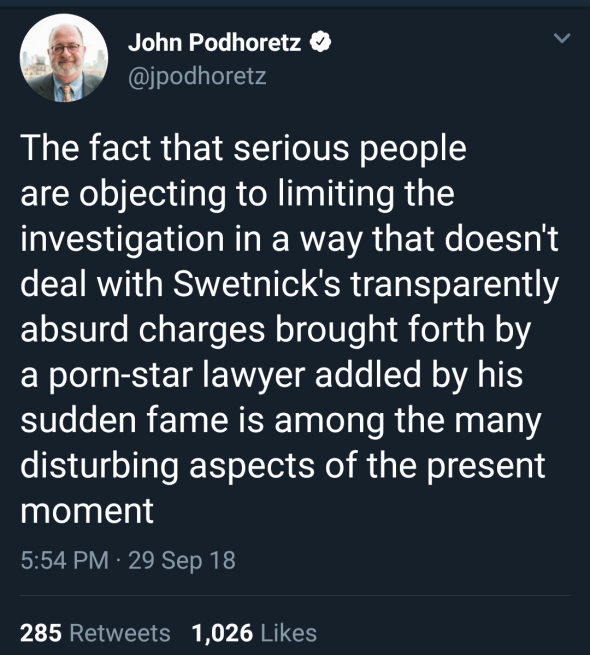 When I saw this tweet the other night, it got the ol’ gears a-turnin’, as my grandfather would say. John Podhoretz was making a point about one particularly one decidedly unserious lawyer promoting a seriously insincere story based on an even more insincere allegation. It’s the kind of nonsense that never would have seen the light of day, other than on some anonymously written blog, not that long ago.

But I contend the problem runs much deeper than a one ambulance chaser engaged in some shameless self promotion. No, the problem is we have a whole bunch of unserious people filling serious positions.

For instance, the entire “Russia collusion” narrative was driven by the campaign staff of a presidential candidate, who contacted a Washington legal firm, who contracted a former spy to write up a salacious “dossier.” And there the story might have ended, except a US senator then was passed this dossier, who took the absurd revelations in the dossier and gave it to the career prosecutors at the Justice Department. Those prosecutors then gave the dossier to the career investigators at the FBI, who used it to gain a “secret warrant” to spy on the other presidential campaign (and after the election, the President of the United States – elect).

So, people in serious positions who got snookered by this bit of legerdemain:

That’s a dozen very well paid people in positions that at one time were considered some of the most important and prestigious in government, the legal profession, the courts and the media. These were positions that once would have been filled with people who understood how serious those positions were to maintaining the apparatus that is the US government, from both inside and out. Instead of people. Those serious positions would have been held by serious people.

Not any longer. It is the crux of the problem Americans see all around us. Is it any wonder we’ve lost our collective trust in these institutions? We have some very unserious people filling positions that are still vital to the nation. It isn’t confined to those dozen people listed above. It is a plague, infecting every level of government, of business, religious life, media and science. The institutions that I and millions of my fellow Americans were taught to admire and respect as youngsters, have spent the past two decades proving that they are filled with people who do not deserve that respect.

I hate tossing out problems without having solutions ready to propose, but I honestly can’t find any to this problem. I learned early on in my career that the best person for the job understood the nature of it, had the skills to perform it and was trustworthy. Obviously, the more senior the positions become, the skills required change, but the person filling the role should still have the first and third qualities. But as we’re witnessing, there aren’t a whole lot of those people around right now.

Be afraid. Be very afraid.

In the past, I’ve written about all kinds of government ineptitude. Mass Transit agencies that can’t get

Like all Americans, I may pay for government fecklessness through higher taxes and astounding regulations that often don’t make sense, even to those charged with enforcing them. Rarely am I directly impacted, as with most of us.

Enter the New Jersey Motor Vehicle Commission. But I offer fair warning: before doing so, suspend all belief in reality and sanity.

My story begins innocuously enough. In accordance with state law, I needed to renew my drivers license. Aside from having to spend an hour or so of my time in line at the Jersey City MVC office, this task generally isn’t painful. I go in, I fill out a form, a stand in a line, I pay my licensing fee, get issued my renewed license and I’m on my way. I imagine for 98% of New Jersey residents, the story is much the same. So you can imagine my shock at being told:

“I’m sorry, but your driving privileges were revoked in January.“

Thus began a saga that is now ongoing for a full month. Over that time, I’ve discovered more about the way government agencies fail to communicate, audit their records properly, admit errors and update said records than I ever imagined was possible. My journey through the empty vastness of government sanctimoniousness isn’t over yet, so neither is my growing frustration with the way such incompetence can seriously impede normal commerce. Over the course of the next few days, I’ll fill you in the details and keep you abreast of further developments.

Suffice it to say, this bit of personal experience makes for a far better story than any piece of fiction I could ever dream up. Feel free to drop comments and current updates by following me on Twitter.