The Meaning of Citizenship

I finished re-reading Robert Heinlein’s Starship Troopers the other day, and it got me thinking. Now, those of you who are only acquainted with the story via the rather dreadful Hollywood version probably think it’s just another space opera. While the backdrop to the story is an intergalactic war between humans and aliens who look spiders and act like ants, in reality Heinlein used the story to convey a message about societies and how they govern themselves. The world Heinlein has created, some 200 years into our future, is one in which humans have abolished our two competing philosophies of governance (democracy and socialism) after a great, cataclysmic war. Instead, there is a global republic – but the only way to obtain citizenship in this republic is by completing a term of service to the government. Not everyone who wants to be a citizen is accepted for service, though. 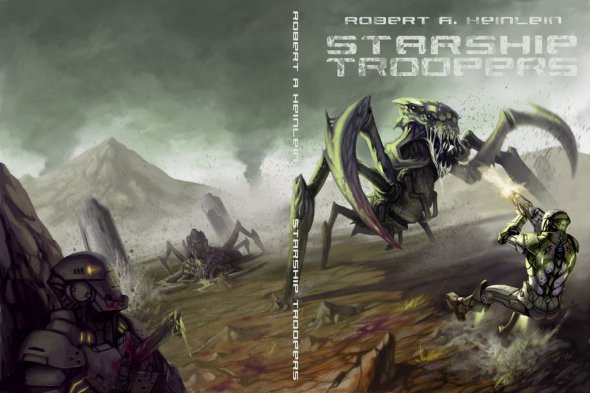 Throughout the novel, Heinlein lays out who is accepted for service and why, and how this society came to be ordered. Despite being originally published in 1959, much of what he wrote as regards the symptoms of a dissolving democracy seems as though it were ripped from the headlines of today. He describes rampant crime in the cities, gangs of youth preying upon the weaker members of the community, rising substance abuse, joblessness, aimless citizens and ineffective (and often corrupt) politicians. But for Heinlein, the greatest cause of societal collapse was that while virtually everyone was granted the privileges of citizenship, few exercised the duties. He wrote,

“…their citizens (nearly all of them counted as such) glorified their mythology of ‘rights’ and lost track of their duties. No nation, so constituted, can endure.”

The principle reason that only those who have completed a term of government service are granted citizenship (and the stringent standards for acceptance into said service) is to ensure that the citizens of the Terran Federation will exercise not only the privileges, but duties of citizenship.

It was this point that got me thinking. As I mentioned, much of what Heinlein wrote about as the symptoms of societal decay are prevalent in today’s society. But something I’ve thought for quite some time is that we have cheapened the value of citizenship to the point that for many of our number, citizenship is even less important than residency. Indeed, we no longer consider granting citizenship as a privilege to a select company of our number. Rather, most of us think of it as a right guaranteed by… something. Stop to think about that for a moment.

We have people here who were never granted residency demanding the same rights as citizens, and others (including those in elective office) defending their “right” to do so. We have people claiming the rights of citizens who have never so much as stepped foot in this nation. Further, the number of citizens who actually exercise the duties of the citizenship given as a birthright is depressingly small. YouTube and Facebook are filled with videos of educated citizens who cannot name the Articles of the Constitution, the rights guaranteed by the Bill of Rights, or define any of the inalienable rights expressed in the Declaration of Independence. Spend more than a few moments on Twitter and you will be verbally accosted by droves of people who cannot tell the difference between a parliamentary democracy and constitutional republic. Visit the local courthouse, and you’ll see most people called for jury duty doing their level best to avoid said duty. And sadly, barely half of us bother to cast a vote when the time comes (and even fewer when the election isn’t tied to a national referendum). Given the sorry regard my fellow citizens have for their duties, I am sorely pressed to say the majority of those casting a vote even know who or what they are voting for – too often, they’re simply checking the box under “R” or “D”.

In the nearly 60 years since Heinlein published Starship Troopers, the condition of our society has deteriorated to the point he foresaw, even if it’s taken perhaps a bit longer (he placed the dissolution of the United States in 1987). The question that’s been nagging me for days is this: Heinlein saw no way out of this mess except to restrict the right of governance to a select few, based on a criteria that placed an innate drive for public service above all other factors. In short, he was of the opinion that our current attempts at including more and more people into the governance of society was exactly the wrong tack. His society works because a caste of elites run things, but not elites as we’re given to thinking in our age. Indeed, the protagonist in his novel quite literally throws away a fortune in order to begin public service (later, his father does the same).

Heinlein is not alone in his thinking. Since the very founding of our republic, we have constantly watered down the requirements for citizenship, as well as the duties thereof. Consider that the men who created the nation saw citizenship as being open only to land owners who had established themselves. Over the intervening years, we have so cheapened citizenship that we now grant adolescents those same rights – and more.

It is something to think about. Why is it we require those not born on our soil to pass an exam and take a loyalty oath before granting citizenship, but not those who are native born? Ask yourself: could you pass the citizenship exam? Would you be willing to take the Oath of Citizenship? Bear in mind, once subscribed to this oath, you will be freely granting the government the power to require unpaid service of you, in both military and civilian positions. Did that last sentence cause you to go “whoa” for a moment?

That sentence is the crux of Heinlein’s argument: the vast majority of our citizens are not willing to truly sacrifice for the privilege of citizenship and prove it daily. He thought human nature being what it is, that such fallibility meant the end of democracy. I hope he was wrong. But I’m not as sure today as when I first read that book some 40 years ago.