Why I’m a Libertarian

When I announce my political affiliation, the usual responses range from subdued chuckle to loud guffaw. “Oh no,” people say. “You’re not one of those crazies, are you? An anarchist, ready to abolish the government?”

Well, I am a Libertarian and have been for a quite a long time. And the reason is pretty simple: if I’m crazy, then so were men like Thomas Jefferson, Samuel and John Adams, Patrick Henry, George Washington, James Madison and Benjamin Franklin. All, excepting Madison, signed the Declaration of Independence. You might have noticed that these men, the original Libertarians, while unafraid to fight for liberty – to give their lives in the cause of liberty, if needed – were hardly anarchists. In fact, when their first attempt at organized government yielded something much closer to anarchy than we even want to dream of today, they organized the first Constitutional Convention.

So, if that’s crazy, feel free to count me in. 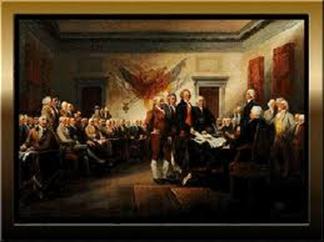 “The Presentation of the Declaration of Independence” by John Trumbull

To put it simply, Libertarians believe that government exists solely to protect individual freedom. But our views on where those freedoms derive are much different than that of the typical Republican or Democrat; in fact, they are diametrically opposed. Ask yourself this question: is government the final arbiter of what constitutes essential liberty? If you answered yes, then you hold the same world view as the vast majority of Republicans and Democrats.

Before you answer that the idea of a government not being responsible for deciding what freedoms we should enjoy is the definition of anarchy, consider the very document that founded our great country, the Declaration of Independence. It is more than a 236 year old piece of parchment that hangs in the National Archives. It is the very embodiment of what makes America, and Americans, unique among other nations and nationalities.

“We hold these truths to be self-evident, that all men are created equal, that they are endowed by their Creator with certain unalienable rights, that among these are Life, Liberty and the Pursuit of Happiness. — That to secure these rights, governments are instituted among Men, deriving their just powers from the consent of the governed…”

Now consider the Preamble to the document that created the federal government, the Constitution for the United States of America. It is 11 years the junior to the Declaration, yet in it the nation’s founding principles are given their equal due – prior to prescribing the methods used to preserve Liberty.

“We the People of the United States, in Order to form a more perfect Union, to establish justice, provide for the common defense, promote the general Welfare, and secure the Blessings of Liberty to ourselves and our Posterity, do ordain and establish this Constitution for the United States of America.”

Understanding the first point is essential to truly understanding the American concept of Liberty and freedom. The only way individual freedoms are absolute is if they come from an authority higher than that of either men or their institutions. Otherwise, individual freedoms are a caprice, something to be given or withheld as determined by the fancy of others. Governments, rather than working to protect those freedoms, become dishonest arbiters of disputes. Eventually, governments (and the people governing) no longer see themselves as members of the general society, bound by contract and convention to uphold liberty. They become oligarchs; a separate class that believes itself superior to the rest of society.

Does that last paragraph give you pause? It should, because we are witnesses to that very transformation. It is not a sudden transformation that occurred in the past two or three years, either – it’s been underway for most of my lifetime. Is it beginning to snowball, accelerating in pace and breadth? Certainly, and the quickening pace over the past few years makes anyone concerned about preserving liberty queasy.

Now, as to why I identify as a Libertarian and not a Democrat or Republican: the proponents of the two major parties are our modern oligarchs, who see themselves as more fit to determine which liberties are essential and which can be abridged by the government. There truly isn’t much of a difference between them, in that both see distinctions in liberties; the difference is only in which liberties they deem more essential. The things they spend their time arguing over are actually further limitations on those essential liberties and freedoms, disguised as concern for safety of the overall society. The reason they feel secure in their deliberations is that the Nation, once enamored of Liberty, is today concerned less with freedom than safety – or at least, the illusion of safety. The people fear deprivation of material desires than the loss of freedoms. They are convinced the loss of freedom for one party will not result in a curtailing of freedom for themselves – when the reality is that any loss of freedom for any American necessitates that all Americans lose some aspect of their Liberty.

Terrific examples come from exchanges I had this week with unabashedly partisan Democrats and Republicans. I fed the same quote to both, and their reactions were remarkably similar. The quote, from Ben Franklin, is “Those who would give up essential Liberty, to purchase a little temporary safety, deserve neither.” The Democrat’s response was that Franklin has been dead 200 years, and his ideals with him. The Republican’s response was that changing times require changing mores.

That’s the final point that our founding document makes, that most Americans either forgot or were never taught.

“—And for the support of this Declaration, with a firm reliance on the protection of Divine Providence, we mutually pledge to each other our Lives, our Fortunes and our Sacred Honor.”

The nation’s founding principle is that the Liberty and the ideals of freedom supersede anything else. Liberty takes precedence over personal comfort, over wealth, over safety and even life itself, if necessary. The very ideal is worth fighting and dying for, as in the case of the American Revolution and the Civil War. What is more, if this principle is derived from an act of Divine Providence, then it does not disappear with the death of individuals nor the passage of time. It is an everlasting, eternal truth.

And if you believe these things, so are you.